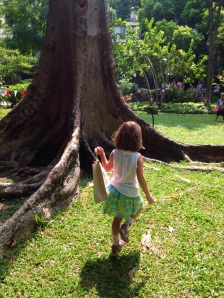 I am finally getting into the swing of things when it comes to celebrating holidays with the kids. We have so many of them when you consider our French, American and Mexican heritages. And now, on top of a social calendar rivaling page 6 socialistas, we  are immersed in all the Asian holidays as well.  At times it feels like a never-ending party to plan.

This weekend, a mere fortnight before the big Songkran or Thai New Year, expats everywhere were on the hunt for Easter booty. Decent quality chocolate eggs and bunnies are not abundant and poor quality treats of the Cadbury cream egg/ Marshmallow Peeps gendre even less so; a fascinating post on the history of peeps here.

Worried that a jam-packed schedule would limit my pre-Easter egg shopping, I decided to sign up my two little banshees for an organized egg hunt in a lovely green garden at the back of a posh hotel. The sign-up fee was to go to a worthy charity; it all sounded like a lovely idea.

With a ten a.m. start time delayed and hords of kids crowding two tiny start lines under the tropical sun, it dawned on me that prancing about a lush green garden collecting eggs was not a such a brilliant plan after all.

Little red riding hood finally made it –Yes, I too have no idea what she has to do with Easter, the basket maybe?– to lead the under fives to their egg area. I was extra grateful since it interrupted the conversation had just started taking place. The organizers were explaining how the bells [Les Cloches] had come through the garden to leave the eggs. I had completely forgotten that the French don’t have a lapin de Pâques. Instead, they tell children that while they are in Church on Easter Sunday, the bells, which have been silent since the thursday night to ensure they don’t ring during the mourning of Christ, return from Rome delivering chocolate eggs as they pass through town.

I hoped P&C didn’t register this new story. We were firmly established as a bunny family and I dreaded the tales I’d have to weave to reconcile the various versions while suffering from heat exhaustion. My kids, stressed from  fidgeting in the sun, with sweat pouring down their faces, soon forgot the morning chaos and ran off ready to fill their makeshift egg baskets. 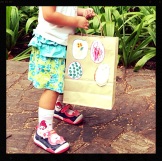 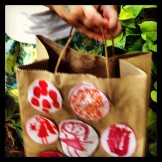 The eggs they were collecting were plastic. There were also large numbers of plastic fish strewn about. I never worked out if this was due to a lack of sufficient plastic eggs or some sort of French Christian thing. P definitely demonstrated the spirit of the day by running around finding kids with less eggs and filling their baskets with her own. Like me no doubt, she will always have an empty bank account. 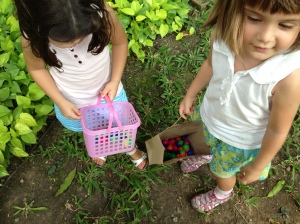 In the end, P’s generosity was neither penalized nor rewarded as every kid handed in their plastic booty to be swapped for a small bag of chocolate eggs straight out of a cooler. The rest of the morning was spent paying obscene amounts for drinks at the hotel bar while avoiding a sea of kids running around with melted chocolate all over their faces and hands -now I understood the reasoning behind the plastic egg. I feel that Songkran, a holiday where people douse each other in water, should be merged with Easter so we can hose down all the kids next year thereby cooling everyone off and washing away all the excess chocolate. Now that’s a little Euro-Asian fusion I can get behind.

A few hours later, P and I hopped into a cab.  As we settled on the nice cool vinyl seats, P asked me what the bunny stickers on all the windows said. I am never entirely sure what to make of cabs plastered in these. I don’t usually like to fib and always try to give honest and realistic answers -apart from the classics like Santa Clause, Bunny, and the tooth fairy. Today,  however, I had an easy answer: 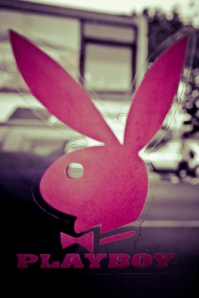 “It’s the Easter Bunny and he is saying Happy Easter”. How grateful am I that my kid isn’t an early reader…