I should probably start by acknowledging that Thai characters are not glyphs. Thai has forty-four consonants (Thai: พยัญชนะ, phayanchaná), fifteen vowel symbols (Thai: สระ, sàrà) that combine into at least twenty-eight vowel forms, and four tone marks. (Pilfered from Wikipedia)

It turns out it isn’t exactly an alphabet but an abugida or a system in which ‘a consonant-vowel sequence are written as a unit.’ And I am not entirely sure what that means.

Desperate not to use too much of my kids’ extortionate fragrance-free shampoo, and in desperate need of conditioner, I thought picking up a couple of bottles at our local Tesco Lotus would be relatively easy. Silly me.

I get to the hair care aisle only to face hundreds of bottles of different products, all in Thai. Had there only been two options, I could have just grabbed a bottle of each and figured it out through trial and error; sadly a variety of different hair treatments were added into the mix.

Twenty minutes later, after carefully studying a large section of bottles -and wandering through a few alternative aisles in the hopes of finding an expat-friendly section with things in English- I found pieces of my Rosetta Stone and I was able to figure out that the bottle on the left with the shorter text and letter resembling a ‘W’ at the end is the shampoo while the one on the right is the conditioner. 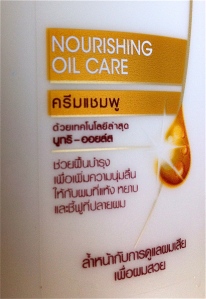 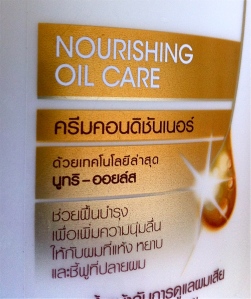 This is the hardest I’ve ever had to work for clean hair and apart from an immense sense of satisfaction at locating what I needed, it dawned on me that there are different types of reading. Of course, if you take it out of context such as letters printed on a white piece of paper, I probably could not pick out ‘shampoo’ or ‘conditioner’. Well maybe after the time spent tweaking the pictures I could make an educated guess but that is neither here nor there. However, if I had to run into a shop and quickly grab a bottle of one or the other, I’d have no trouble now that I have a block image of what each word looks like.

How ever tenuous the strand (pun intended), I am going to believe that I’m one step closer to reading Thai.

P.S. I am going to ignore the fact that if I plug both shampoo and conditioner into google translate, it gives me an entirely different set of characters… Boo.

4 thoughts on “Deciphering Glyphs and my Journey Locating Conditioner.”